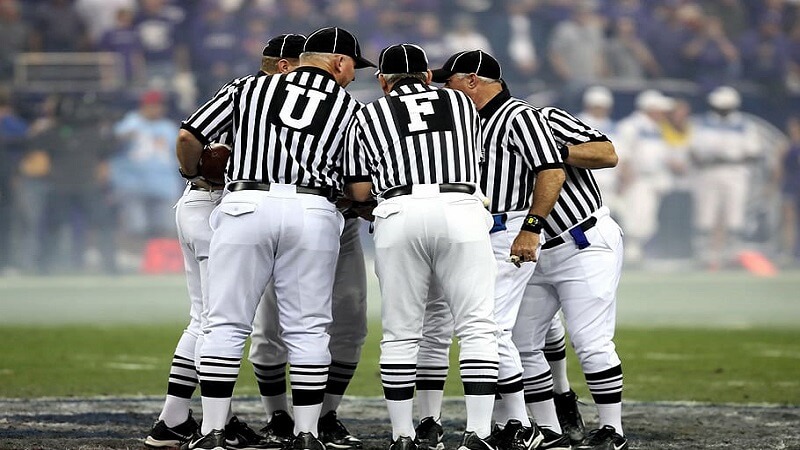 A referee in the NFL will usually be paid considerably more than most other sports league referees around the world. But how much would a referee make in the NFL?

NFL referees will make about $215,000 per year according to big sports publications like FanDuel.

We will start our series of interesting sports trivia articles with questions to some very interesting questions about the salary of NFL refs and what factors will influence this salary.

So let’s get right into it, shall we?

What Exactly Is an NFL Referee?

An NFL referee, also called a ref, refers to an individual that will enforce the rules of the football game. They, just like referees in any other sports, will make sure that the game develops inside its clear rules and anyone getting outside of the rules is penalized.

This person will usually be in charge of making important decisions about different game situations, that are considered final and cannot be opposed or changed by the players. This puts an immense weight on their shoulders to ensure the success of any game. You will be required to reach very high standards and pass a lot of requirements in terms of experience to become an NFL referee, but the salary will make everything worth it.

How Much Money do NFL Refs Make?

What Are the Expected Salaries for NFL Referees For The Years to Come?

Football as a sport is becoming more popular with each passing year in the US. It has a billion-dollar industry around it and it continues to grow.

Of course, being one of the most-watched and enjoyed sports in the US, football features high salaries across all of its participants. This includes the managers, players, coaches, staff, and of course, the referees.

Most of the time, the salary of the NFL officials will differ among individuals doing the same work based on their years of experience, talent, overall results, and of course, their ability to gather big crowds of fans. Overall, the expected income will be a considerable one.

So What Is the Expected Salary of an NFL Referee?

It didn’t happen too long ago for the NFL Referee Association to agree upon a bigger compensation for game officials. So how much does an NFL referee make per year at this point?

Extensive research done by big sports publications has shown that on average, NFL referees will make around $215.000 per year. Not too long ago, before this raise was approved, NFL refs used to make around $150,000 per year. This is an average so some professionals might make even more than this. They can even receive additional bonuses per game.

In the case of amateur referees, you should know that they usually won’t make more than $20 per hour. This amount will vary, of course, based on the importance of the football game they participate in. This is basically nothing compared to what the NFL game officials make.

Why Are NFL Referees Paid So Much?

The NFL actually comes from the National Football League, which works as one of the most popular sports associations. It works as a for-profit business. They operate with a combination of employees, NFL officials, and NFL players. The services offered by their business are the actual NFL football games.

Currently, the NFL is one of the most-watched and waited-for leagues in the US. Most of the winnings that the NFL makes come from the winning of the seasons. Also, as you know, a referee, depending on their experience, can make or break a game and can give or take a victory to and from a team. This is why it does make sense for the NFL to properly pay its referees.

Take a look at this video about football referee wages

The Standards of an NFL Ref

It will be very hard to become an NFL ref. The following factors will be taken into account as vital requirements for a referee in a league with the size and popularity of the NFL.

One of the most important requirements for any ref that aspires to an NFL referee position will be his experience. And this experience should be considerable, which means that you surely have no shot with just one or two years of being a ref. You will usually be required at least ten years of official reffing in football games to even be considered as an option.

You won’t be required to have any individual degree to apply for an NFL referee position, although, any degree that would be tangential to the sports field will surely help. Someone that majored in either health, sports, or management, for example, will have a real advantage over someone that has a law degree.

Health and physical stamina are two of the most important conditions for most sports-related jobs, not just when you want to become a referee. They are ten times more important for an NFL ref because they will have to be healthy and fit enough to be active throughout the game. They can’t just decide to take a break and will need to watch over the whole field action.

Steps Required to Get an NFL Referee Spot

Winning an NFL referee seat will be a very important achievement for anyone, but it would also take a lot of work and time to get there. As we already said above, the NFL only looks for people that have over 10 years of experience as referees important in football games.

Their knowledge should be aligned with all of the football-related rules and laws and they should have a very flexible schedule.

You will find some steps below for anyone considering a job as an NFL ref.

Step 1*: Get at least one Bachelor’s degree that is tangential to sports

The asterisk means that this step isn’t a must. Although the NFL doesn’t specifically require a Bachelor’s degree, an applicant will have considerably more chances to be picked as a referee if they have one or more of these degrees.

The reason behind this is that a degree will also come with a huge amount of theoretical knowledge. A candidate that will show a couple of bachelor’s degrees will have a higher chance of landing the job than one without higher-level education.

Step 2: Go through the training process 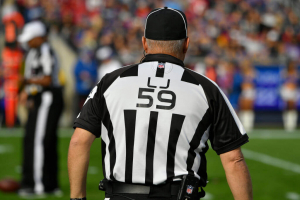 A candidate will be able to go through the training classes provided by professional training schools or colleges. These are courses that would give you all the theoretical knowledge about the actual game that a candidate will surely need to become a professional referee.

He needs to understand the rules of the game perfectly and to know how to play it first before he can be trusted to take game-affecting decisions. A future referee will also be taught about the culture of the game, but also about morality and team spirit.

Step 3: Get registration of state

A ref will have to get registration from the state in which he will want to work. You won’t be able to work directly with the NFL. Most starting referees will be requested to participate in high school or college games.

Although most of the time a candidate will have to take and pass a written exam, regulations do differ by state, so you will have to get the necessary information about the registration requirement in the state where you want to work.
This is where the knowledge from the training classes will be really helpful.

Referees will usually obtain these certifications when they participate in special training classes and courses. The rarer and more expensive the course is, the more valuable the certification will be.

This step is again not really a must but would help a lot. When it comes down to a final decision between two candidates, the one with better accreditations and certifications will usually get picked. The more certifications you have, the more you show your devotion to the referee career and the more knowledge you prove you have. The NFL will always try to give a higher shot to a more prepared candidate.

The steps above should usually be enough to become a part of the NFL referee team. You can consider the sixth step you doing a good enough job to keep this position for as much as possible. NFL will always be looking for new talent so you can always be replaced by a newer candidate the same way you replaced someone at some point.

As a final step, the staff will check your ref working schedule for the past seasons and if you qualify, then you will be invited to become a part of the NFL.

You will find below some of the more common questions that pop up in discussions about how much the NFL referees make.

1. Is the job of being an NFL referee considered a full-time or a part-time job?

All of the referees that are a part of the NFL are considered part-time employees. They will usually only work during the game season and will be free from the end of the season until the start of the new one. Although, throughout the playing season they will be working full-time.

2. How much is a referee expected to get for the Super Bowl games?

The NFL referee team members that call the most popular event in the world, the Super Bowl, will get over $10,000 each.

3. Who are the NFL Officials?

The NFL Officials are a crew of just seven important people. These are the Referees, Side judges, Back Judges, Down judges, Field Judges, and Umpires.

Although each of them will have their own tasks to ensure that the rules are being respected, only the referee will be able to make final calls. The referee will also have the highest salary of all the seven members.

This article should give you all the information you will need to figure out exactly how much an NFL referee is earning as well as how much a football referee will be making per game and per season. The journey up until you will be selected as an Official for the NFL will be long and hard, but in the end, it will be completely worth it.

How Long Is a NBA Game? – The Full Time of Basketball Games
Scroll to top