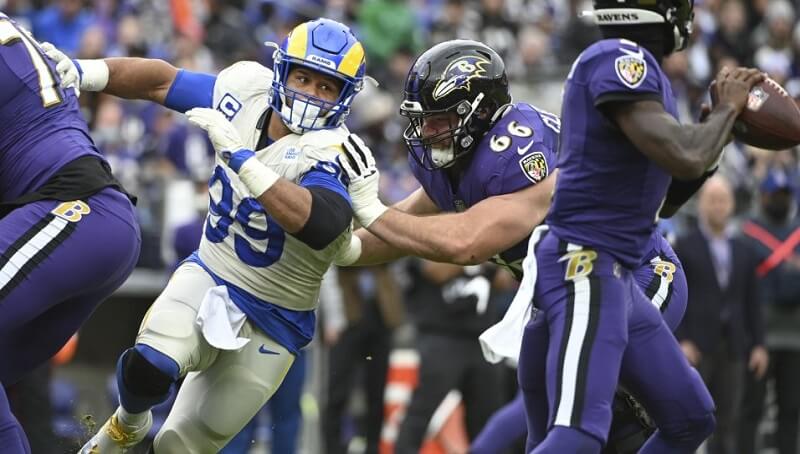 It’s very clear that football is a team game, but did you know that each player will have their own position with their own tasks inside a game? While some positions will require a lot of action around the ball, other positions will have football players significantly impact the game without touching the ball.

But what are the positions in football? And more importantly, what is the most crucial position in football? Below you will find a list of all of the football positions along with their main responsibilities inside the game.

So let’s get right into it and learn more about football positioning.

Below you will find a list of all the positions in the American Football: 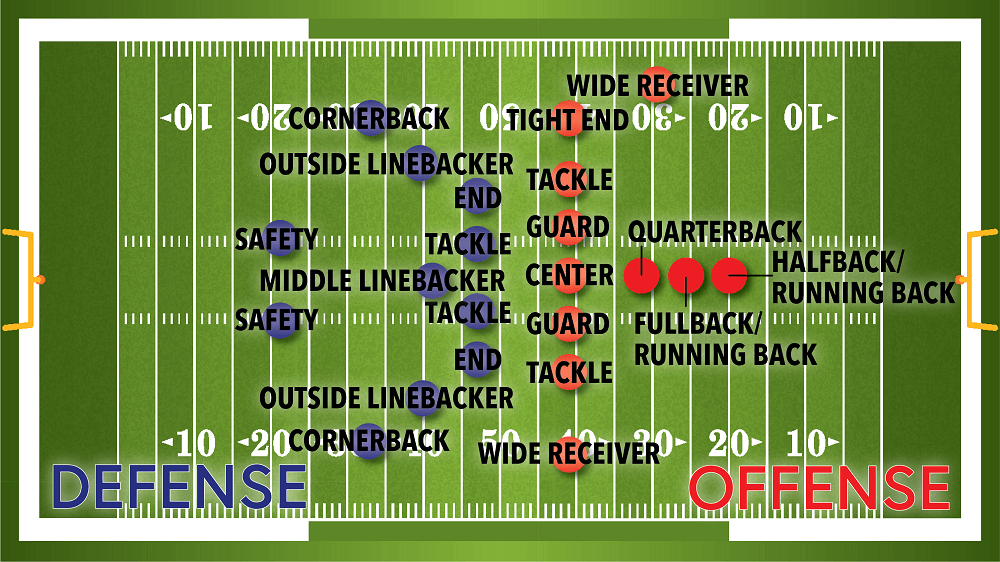 The Offense of the Team

Five players will be part of the offensive line. These are players occupying the right tackle, left tackle, right guard, left guard, and center positions.

As the name implies, the center will occupy the middle of the team’s offensive line. The center will have the job of snapping the ball through his legs to the quarterback that is behind him, at the beginning of every down.

You might also like my other articles on the salary of the NFL waterboys, the size of a football field, or the length of half time in football.

The Right and Left Guards

The left and right guards will occupy the sides of the center, and, along with the center, will have to make an impenetrable line that would prevent the defensive linemen from getting to the quarterback. They also have the task of opening up the defense so that the running back can get through. Considering that these players are neither receivers nor running backs, it will be illegal for the guards to deliberately receive a forward pass.

The Right and Left Tackles

The right and left tackles will be situated on the outer sides of the guards. They will have the hard job of blocking defensive linebackers from going over the line of scrimmage. Another important job the tackles have is to keep players of the other team’s defense from getting close to any offensive player that has possession of the ball all throughout the game.

Two running backs and one quarterback will occupy the offensive backs positions.

Considering that the quarterback will have to decide the offensive strategy throughout the team huddle and will call most plays, the player occupying the quarterback position will be vital to the overall success of the team. Depending o whether the play the team goes for will be a passing play or a running play after the quarterback receives the ballet from the center, he will have to pass it to either an open receiver or a running back. There are some plays in which the quarterback can actually run towards the defense team himself with the ball. This happens especially during complex plays like the quarterback sneak or the option run.

In short, the player in the running back position will have to travel as far as possible in the end zone direction with the ball after receiving it from the quarterback. The running back will either be classified as a fullback or a halfback depending on the offensive play the team goes for. The halfback is usually de most popular member of the team, and this is because he will be responsible mainly for carrying the ball throughout most of the play. The role of the fullback will be quite different. He will have to block the defense and clear the path so that the halfback can travel through. This means that this player will basically act like an offensive lineman.

The offensive receiver positions will be made of one tight end and two wide receivers.

The tight end received will have the responsibility of either acting as a third receiver or blocking the opposing team’s defense from reaching the quarterback, depending on the offensive play the team agrees upon. His position will be right behind the offensive line.

The wide receivers will have to run as fast as possible down the field, and avoid any members of the defense, with the goal of positioning themselves in the best place to receive the ball that is thrown by the quarterback. They will then have to run downfield and try to score points by getting into the end zone. Their position will be on the outmost edge of the offensive line. They will stay right next to the guards.

When a team isn’t in position of the ball it is considered on the defense. The team on the defense will split into the defensive line and the secondary unit.

The Left and Right Tackles

The defensive ends will be situated on the outside of the right and left tackles. They are the players that will have to either shuttle the offensive running back towards the linebackers at the middle of the field, to try and stop the run or rush towards and become an obstacle for the quarterback.

This unit will be made of players playing as strong safeties, free safeties, linebackers, and cornerbacks.

Players in the cornerback positions will have to block the wide receivers from getting to the ball. They are located towards the edges of the defensive line. They will do everything in their power, like tackling the offense and intercepting passes, in an attempt to create defensive turnovers. They will be responsible for hindering offensive plays.

The two linebackers will be positioned just behind the defensive line. This position is usually for the biggest and strongest players of a team. The linebackers will have to make sure that the running backs and other members of the offensive team won’t go down the field and stay as far from the end zone as possible. They will also try to disrypt passes made by the offensive team on their part of the field.

The strong safeties and the free safeties are behind the linebackers. Their job will be to stop players from the offensive team from getting close to the end zone. They will be the only ones to stop them after they have gotten past the linebackers.

Kicker (Offense) – A field gold in the clutch scored by the kicker can actually decide the match. But this isn’t very common in games. A kicker won’t participate as much as other players will in a game, which is why their roles aren’t all that visible.

Punter (Kicking Team) – The job of a punter will be to put the team in a better position defense-wise when it will get fourth down. The team can actually be put in a difficult position in this stage by a weak player, even though this particular player isn’t usually a big part of the game.

Returner (Return Team) – Returners are usually wide receivers that will assume this responsibility. This happens when a team will leave just one person to respond to kicks. This is also a position that won’t appear quite that often in a match.

Long Snapper (Offensive Teams) – The job of a long snapper in a game will be to take the ball to the holder and the punter successfully. This isn’t a necessary part of the game and a lot of games won’t see a lot of action from the long snapper, although an errant snap can mean that the opponent receives free points.

What you should get from this article is that the quarterback is very high on the list of important roles in a football game. Depending on the type of play the teams go for, some of the roles will be more or less important in a game.

This article should give you an idea of the most common positions of the players in an American football game. You might know about some, some might even pop up in the future depending on how the teams will change their tactics.

How Much Do NFL Waterboys Make? A Surprising Answer

How Many Kids Does NBA YoungBoy Have?
Scroll to top